Saved Searches Advanced Search
We are not accepting holds on physical books and DVDS while the libraries are closed. Only online materials can be put on hold or checked out during these closures. Your “For Later Shelf” is a great way to keep track of all the books, movies, and more you’d like to checkout after the libraries reopen.
To help prevent the spread of COVID-19, all MARINet libraries have closed. For the most up-to-date info, please see the library websites.
Print 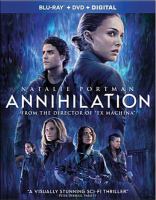 I found this to be one of the most memorable movies I've seen. It is strange and confusing and at times frightening, but never boring. I loved that the team was made up entirely of women, and that each and every one of them is realistic and unique and complex. They aren't decorated or made to look attractive. The mind behind the creation of this story was a creative one, and I think it's an excellent movie for when you're seeking something unlike what you normally watch.

Meh. Just watch the start, keep fast forwarding until closer to the end.

An interesting movie, the images and settings great. It'd been wondeful if the ending was different, as the whole "enemy hidden within, to continue on" thing is old hat, surely something more interesting could have been done? I do like that the alien entity didn't appear to have a specific ambition, only just navigating its own existence and discovery of its new circumstances and contact(s) made.

Hmmm... Definitely some poor language but not excessive. Weird, and jumps around a bit.

If you are a thinker, and enjoy movies which are beautiful and visual, this is a great movie.

At times scary, then visceral and some slow boring drama however, real life & genetic mutation is slow too. Great ending!

What's the point? Forget this drivel.

Annoying because some parts are good and others have you going, WTF? Dumb ending; but enjoyed the motif of doubling (noticed how often the camera isolates the subject inside double lines.)

Not really a thriller; more a 'see what we can do with CGI'er."

PC (spoiler) alert: 1) man giving up his life so woman can come back and engage in romantic relationship with another man, so, as usual, keep opening up options for women while keeping options the same for men. 2) women easily lifting backpacks that in real life would be, like, heavy.

Lena, a biologist and former soldier, joins a mission to uncover what happened to her husband inside Area X, a sinister and mysterious phenomenon that is expanding across the American coastline. Once inside, the expedition discovers a world of mutated landscape and creatures, as dangerous as it is beautiful, that threatens both their lives and their sanity.

Old age forgot I had already seen this one. In fact, feel asleep this time around. Woke to see the finish. But in my defense, I had a hard day's work cutting down a large neighbors tree limbs, cleaning carpets and gutters, etc. Star rating suits my opinion of this movie.

"The Immortal Life of Henrietta Laos " (?)

The name of the book Lena reads as she and her husband (Oscar Isaac) sit before the (depressingly generic) fireplace.

This quote is not in IMDb:

This is a cell. Like all cells, it is born from an existing cell. And by extension, all cells were ultimately born from one cell. A single organism alone on planet Earth, perhaps alone in the universe. About four billion years ago... one became two, two became four. Then eight, 16, 32. The rhythm of the dividing pair... which becomes the structure of every microbe, blade of grass, sea creature, land creature... and human. The structure of everything that lives... and everything that dies. As students of medicine, as the doctors of tomorrow, this is where you come in. The cell we're looking at is from a tumor. Female patient, early 30s, taken from the cervix.

Over the course of the next term, we will be closely examining cancer cells
in vitro and discussing autophagic activity.

This quote is one of many in IMDb (Thank you!!)

Lena: Why did my husband volunteer for a suicide mission?

Dr Ventress: Is that what you think we're doing? Committing suicide?

Dr Ventress: So you're asking me as a psychologist?

Dr Ventress: Then, as a psychologist, I think you're confusing suicide with self-destruction. Almost none of us commit suicide, and almost all of us self-destruct. In some way, in some part of our lives. We drink, or we smoke, we destabilize the good job... and a happy marriage. But these aren't decisions, they're... they're impulses. In fact, you're probably better equipped to explain this than I am.

Lena: What does that mean?

Dr Ventress: You're a biologist. Isn't the self-destruction coded into us? Programmed into each cell?

This quote is one of many in IMDb:

Kane: I was just looking at the moon. It's always so weird seeing it like that in the daylight.

Lena: Like God made a mistake. Left the hall lights on.

Lena: Pretty sure he does.

Lena: You take a cell, circumvent the Hayflick limit, you can prevent senescence.

Kane: I was about to make the exact same point.

Lena: It means the cell doesn't grow old, it becomes immortal. Keeps dividing, doesn't die. They say aging is a natural process, but it's actually a fault in our genes.

Kane: I get really turned on when you patronize me. It's really hot.

Lena: Without it, I could keep looking like this forever.

Kane: Oh, okay. Well, that could constitute a mistake.

There are no ages for this title yet.

There are no summaries for this title yet.

There are no notices for this title yet.

Find it at MARINet